Well, this week I am again at the MacKenzie Center and sitting on Smokey Bear’s head and hat. I was a bit nervous and a little scared 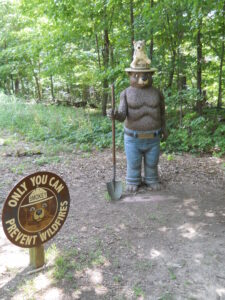 when Johnny asked me if I wanted to do this. I know that bears and wolves don’t always get along together. In the wild, a wolf pack might try to move in on a bear’s meal, or a bear might try to get at some of the wolves’ meal. I had never seen a bear this big before. Actually, I had never seen a bear before. My little paws were shaking and the fur on the back of my neck was tingling.

Johnny told me that Smokey was a good bear. His dad said that the really scary Bears live in Chicago and come to Wisconsin to battle with Packers. I really didn’t know what he was talking about, but it has something to do with football. I don’t even know what a Packer is. Johnny said that his dad would buy me a Packer hat and maybe a cheesehead and explain everything. I told them that I like the head I already have and I didn’t want one made of cheese.

So after Johnny introduced me to Smokey, it was agreed that I could sit on his head and hat without any worries. Smokey turned out to be a really nice friend. Johnny told me that he is the symbol of the United States Forest Service, and he helps educate people on the need to prevent unnecessary wildfires. Some wildfires are caused by lightning, like the ones burning now in California. These fires can cause a lot of damage, especially if they burn near buildings and peoples’ homes.

Some other fires are set on purpose and are managed by professionals to maintain prairies and to keep some types of woody brush and trees out of the area. These fires help grasses and wildflowers grow.  You may have seen some members of the Wisconsin Department of Natural Resources burning prairies at the MacKenzie Center. They usually do this in the spring and sometimes in the fall. If the prairies aren’t burned, the woody vegetation will take over and the grasses and wildflowers will disappear. Johnny says that it is a good idea to have a mixture of different types of plants in an area - some prairies, some woods or forests, and some wetlands. Science people call this ‘diversity’ - that’s a new word for me. It means a little bit of several things rather than a lot of just a few things.

The wildfires Smokey tries to prevent are the unnecessary fires, the ones caused by humans being careless. Smokey tells people not to play with matches, not to throw away cigarettes, and to be sure campfires and trash fires are completely burned out before leaving them unattended. People should douse them, stir the ashes, and douse them again. Following these simple rules can prevent many unwanted wildfires. Remember, “Only you can prevent a wildfire” - that is Smokey’s motto. Johnny said that if I promised to follow Smokey’s rules, I might become an honorary Forest Service volunteer. That would be really neat! 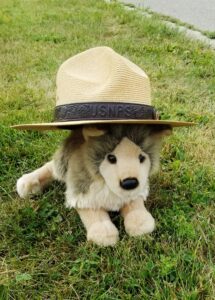 Johnny also told me that his class at school had learned about Smokey Bear last year before the pandemic closed everything. Smokey turned 75 years old in 2019. That’s pretty old for a bear.  I didn’t know they could live to be that old. Can they still play football and scare Packers at that age?

With help from his teacher (a really smart young lady), Johnny and the other students learned that in 1944, the United States was fighting in a war. Many of the young men in our country were overseas trying to end this war. If enemy bombs were dropped on some of our western states, wildfires could result and there wouldn’t be enough young men left to fight the blaze. The U.S. government needed an advertising campaign to educate the public on the need for safety and to reduce the likelihood of unwanted wildfires. Someone came up with the idea of using a drawing of a bear on a poster. A few years later during one wildfire, a small bear cub was seen climbing up a tree saving itself from the fire. This little bear was adopted, placed in a zoo, and became the Smokey we know today.

Although Smokey is the symbol of the U.S. Forest Service, The Wisconsin Department of Natural Resources played a role in Smokey’s development. The D.N.R. designed his outfit - the jeans (Smokey calls them dungarees), the belt, the shovel, and, of course, the Smokey Bear hat. That is why Smokey is on display at the MacKenzie Center. He often greets people as they leave their vehicles and welcomes them to the property.

Johnny thought that some of you may want additional information regarding the history of Smokey, so I have included a D.N.R. link at the bottom of this week’s story. If you want to learn a song about Smokey, there is also a YouTube link. When you are on the YouTube site, just search ‘Smokey Bear Songs’.

Wow, that was an awful lot of education for one visit. I think now might be a good time for a nap. This little wolf is one tired pup. But before I fall asleep, I will tell you where I was last week. I was next to the bald eagle nest located among the animal cages. Did you guess correctly?

And now, can you identify where Smokey and I are located this week? Hint: we are near another structure that is associated with 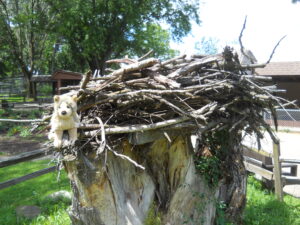 Are you ready to play ‘Where’s Wolfie’? See you soon.

Email your entry for this week’s “Where’s Wolfie” contest to whereswolfie2020@gmail.com before 5:00 p.m. on September 11. If you are the prize winner, the Friends will contact you by return email. If there is more than one correct entry to this week’s contest, the Friends of Mackenzie will draw a contest winner from among the correct entries.