If you were wondering why I could hear your voice squealing and laughing in last week’s picture, it is because I was sitting at the entryway to one of the dormitories at the MacKenzie Center. I thought I was hearing the laughter of all of the children who stayed at the dormitory in past years.

Speaking of the beds, the one you probably slept in when you stayed at the MacKenzie Center was replaced by the Friends of

MacKenzie in 2016 as part of a special project funded through donations from people like you. That bunk bed fundraiser was a bit like the fundraising that the Friends are doing now for the enhancement of the Wildlife display. The Friends of MacKenzie hope to raise enough money to give my cousins, the real wolves, a new home. Can you help?  For more information or to donate, just go to the Friends’ website http://friendsofmackenzie.org/. 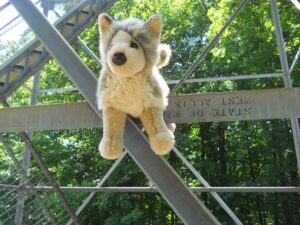 This week, you can find me sitting on a metal structure. It has four legs and several supporting arms. Because of the COVID-19 pandemic, I am not allowed to climb to the first landing which is 40 feet in the air, but Johnny told me that he climbed it last year and the view is quite spectacular. I thought sitting on Smokey Bear’s head gave me a completely different perspective on the world around me. Being only a foot or so tall, I tend to experience the world at ground level. On Smokey’s head I was able to see much more and at a far greater distance. Being on the platform, I could probably see forever.

This is how Johnny described it. To the north, you can see the rolling hills and family farms of Columbia County. Johnny said that he could pick out his grandparents’ house and farm which was five miles away. To the west and far off in the distance, you can see the wooded Baraboo Hills and maybe watch the sunset. Devil’s Lake is somewhere in those hills. Johnny’s dad said that he would take us there some day, but I’m not sure if I want to see a lake with a devil in it - that might be too spooky for me.

Also to the west, and on the MacKenzie Center property, are several maple trees. At this time of year, Johnny says that the leaves change color. With the shorter days and cooler nights, the green leaves are becoming yellow, orange, and red. It has something to do with photosynthesis - the process where plants make sugar. Johnny’s teacher said that all the colors are present in the leaves throughout the spring and summer; it’s just that there is so much green color from chlorophyll that the other colors are not visible. When the chlorophyll breaks down, the other colors show up - just some more cool science.  I sure am learning a lot from Johnny, his dad, and his teachers.

There is one sad part to this story. As a wolf, I am a member of the dog family and a group of animals known as mammals. Mammals have fur (hair), are warm-blooded, and feed their newborn young milk. But we don’t have very good color vision. I see things primarily in black, brown, grey, and white. As such, I’m not able to always see the changing seasonal colors, but I do have a very good nose and very good ears.

The view to the south is blocked by several trees. You will be able to see more when the leaves fall. Johnny told me that there are buildings to the south where MacKenzie Center volunteers make maple syrup using the sap from the maple trees. Johnny’s class came

to the MacKenzie Center and they learned about the entire process - how to identify a maple tree, how to tap a maple tree to get the sap, how to collect and boil the sap to remove water, and how to turn it all into syrup. It sounds like quite a process, but fortunately there are a lot of volunteers. Johnny’s dad helps out, and he gets a few pints of maple syrup each year. If the MacKenzie Center is able to have school groups visit this spring, I would like to see the operation up close and in person (or maybe I should say, ‘in wolf’).

Now, directly below the platform and to the north and east, are the animals in the Wildlife Exhibit. These animals are not captured and taken from the wild. These are animals that could not survive in the wild - some have been injured, and some have been raised by humans. The animals are well cared for by MacKenzie staff. Members of the University of Wisconsin School of Veterinary Medicine help maintain overall health. The animals do serve a purpose. They act as educational ambassadors, allowing the DNR staff and Friends of MacKenzie volunteers to teach wildlife conservation and explain various ecological principles. Many of the visitors to the MacKenzie Center live in cities and have never seen, or heard, some of these species.

The first animals you can see are the buffalo. Technically, they are American bison. Three live at the MacKenzie Center - a large male (bull), an adult female (cow), and a younger cow, but no longer considered a calf. Bison were much respected by several of the Native Americans or First Nation people. All parts of the animal were used for a specific purpose; nothing was wasted. Buffalo once roamed the prairies of Wisconsin, but they were eliminated in the 1830’s. Today, they can be found on private lands and on DNR properties, but none are free-roaming.

Next to the bison, is an enclosure with a female white-tailed deer (doe). Before this deer came to the MacKenzie Center, there was another doe on the property - it lived to be 26 years old. That is a very old white-tail. In the wild, most do not live beyond 5-10 years. In Wisconsin, there are three members of the deer family (cervids) - deer, elk, and moose. There are two populations of elk in the state. One population is in northern Wisconsin near Clam Lake; the other is in central Wisconsin near Black River Falls. A few moose live in northern Wisconsin but not very many. I have never seen an elk or a moose, but I have seen several deer. For some reason, I always seem a bit hungry when seeing one.

Next to the deer, are my cousins - the wolves. There is a male and a female. Actually, they are a brother and a sister that were raised

by humans as pups. The wolves are really cool - not only can you see them up close, you can often hear them. Their howls can be heard all over the property and even on the neighbors’ property. I’m still learning how to howl; it takes a lot of practice. Johnny’s mom asked me to keep quiet on moonlit nights when the family is asleep.

Wolves belong to the dog family (canines). In Wisconsin, we have wolves, coyotes, and two species of foxes - the red fox and the grey fox. At various times, all four species have been present at the MacKenzie Center. 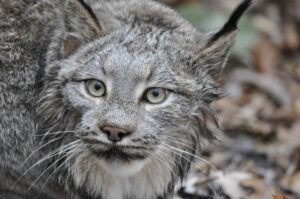 There are two lynx on the Wildlife Exhibit. Lynx, along with mountain lions (cougars) and bobcats, belong to the cat family (felines). The lynx is a rare species in our state, being on the southern boundary of its breeding range. Mountain lions wander into Wisconsin occasionally, usually coming from the Black Hills region of South Dakota. Bobcats are found throughout the state with the exception of the southeast corner. At one time, all three species were present on the property.

The MacKenzie Center is also home to a bald eagle, a red-tailed hawk, a great-horned owl, and a barred owl.  These species are birds of prey, or raptors. Johnny’s dad told me that the word ‘raptor’ comes from a Latin word ‘rapere’ meaning to snatch. They snatch their prey with their feet. Maybe you have seen the Jurassic Park movies - velociraptor dinosaurs also snatch prey with their feet. In addition, the MacKenzie Center is home to a turkey vulture. Unlike the raptors, the vulture ‘snatches’ prey that is already dead; it is a scavenger. The turkey vulture, unlike most birds, has a well-developed sense of smell that helps it locate rotting meat.

Because the species of animals change from time to time, you are never sure what you may see at the MacKenzie Center. At present, you might also see a raven, a cottontail rabbit, or a wood turtle. So come often and maybe you will see a new species, or visit one that you have seen and enjoyed many times before.

When the MacKenzie buildings and structures are once again open to the public, I hope to climb to that first platform and get a first-hand view of the area. I think it will be pretty amazing. But for now and for the remainder of the week, I am returning home with Johnny and his dad. It is Sunday, and there is a Packer game on TV. I’m starting to like these football games; maybe someday, I will even be able to tackle a bear.

So, do you know where I am this week? If so, you can email your response to whereswolfie2020@gmail.com by Friday, October 9, 2020 at 5:00 pm. A winner will be randomly drawn from the correct answers and announced on Saturday. 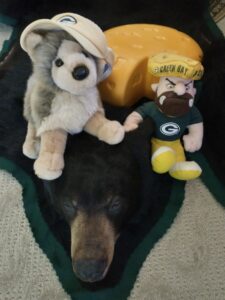