Hi, you can call me Wolfie since I really don’t have a name. 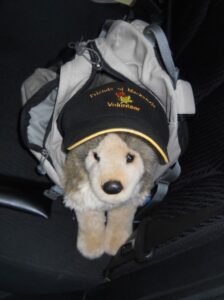 In late July, 2020, my human friend Johnny and I took a trip to the MacKenzie Center near Poynette, Wisconsin. Johnny thought the MacKenzie Center would be closed, but no, we were able to see the animals, walk on the trails, and enjoy the outdoors, even though the buildings were closed because of the Corona virus.

I’m only a pup, but Johnny is much older – eleven or twelve or so. On the way to the MacKenzie Center I got a ride in the back seat of the car in Johnny’s back pack. Since we are going to play a game, have lots of fun, and maybe even help the Friends raise some money for the new wolf pens, Johnny said I should wear his Friends volunteer cap. I was excited to be able to help.

Johnny suggested that we play a new game while we were at the MacKenzie Center. The game is called “Where’s Wolfie”. The nice thing about Where’s Wolfie is that you can play it if you’re a kid like Johnny, or Johnny’s parents or grandparents, or a teacher who has taken students like Johnny to the MacKenzie Center for an environmental or outdoor lesson, or almost anybody who has been there. You get the idea. 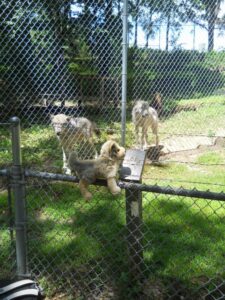 is how we will play. Starting in one week and each week thereafter, the Friends of MacKenzie will post a new picture of me that Johnny took at the MacKenzie Center, and you can guess where the picture was taken. To enter the contest, email your guess to whereswolfie2020@gmail.com. If you are the winner of the contest, the Friends of MacKenzie will contact you by return email. SEND YOUR GUESS before 5:00 p.m. on the Friday after the contest is posted (next week).  If there is more than one correct answer submitted, the Friends will draw a winner from the correct entries. Each week the Friends will publish a new picture of me and an article for a next weekly contest and tell you where the prior week’s picture was taken, so if you don’t win the first time enter again.

Well, Johnny and I did visit the wolves living at the MacKenzie Center. There was a paw print of an adult wolf on the fence right by the place the wolves live.  As I looked at it, I wondered if my footprint will ever be that big.

I saw that he wolves could use a new home. Something a bit bigger would be nice. The wooden shelter they have could also be updated to something better. Johnny told me that the wolves’ current home was built in 1984. That means the wooden shelter is about as old as Johnny’s parents. Wow! Ancient!

So I wanted to help the wolves get a new home. You can help too. Start off with playing “Where’s Wolfie” with your family. See if you can be the first to accurately guess where next week’s picture was taken. Your parents and even you grandparents can play too. They may have come to the MacKenzie Center when they were in grade school or middle school. (Yes, Johnny’s parents said they had been 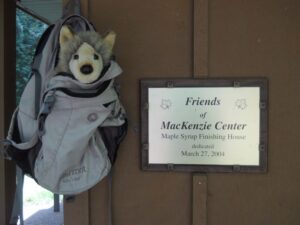 to the MacKenzie Center to learn about making maple syrup when they were in 4th grade!).

Johnny and I will publish the first segment of “Where’s Wolfie” next week. After taking so many pictures on my trip to the MacKenzie Center, I was one tired puppy and all I could do was crawl back into the Johnny’s backpack and get ready for a nap.

Will you please play “Where’s Wolfie” with me next week?

Email your entry for this week’s “Where’s Wolfie” contest to whereswolfie2020@gmail.com before 5:00 p.m. on September 11. If you are the prize winner, the Friends will contact you by return email. If there is more than one correct entry to this week’s contest, the Friends of Mackenzie will draw a contest winner from among the correct entries.